h.arta group’s project Before and after consists of four pieces: a documentary video showing the moments around the discourse of Timisoara’s mayor from the New Year’s Eve with the occasion of Romania joining the EU and three individual comments about the ways in which the past and our newly achieved position are constructing our identity.

Maria Crista’s work Back to Vienna is revisiting the project What would you do in my place in Vienna?, a project that we realized in Vienna, in 2003, during a one month residency. The project was about asking friends and collaborators from Timisoara what would they like to do if they stayed for a month in Vienna. We performed these requests and sent back home postcards with the documentation of them. These wishes, as some slides from a dreamed world, were specific for a certain way of viewing the “western” countries as idyllic and faraway countries. The work Back to Vienna consists in a text explaining the past longing for an idealized place, text written on the back of one of the postcards used in the project What would you do in my place in Vienna?. Between the reused image and the newly written text it is a tension created between an imagined and an existing world. 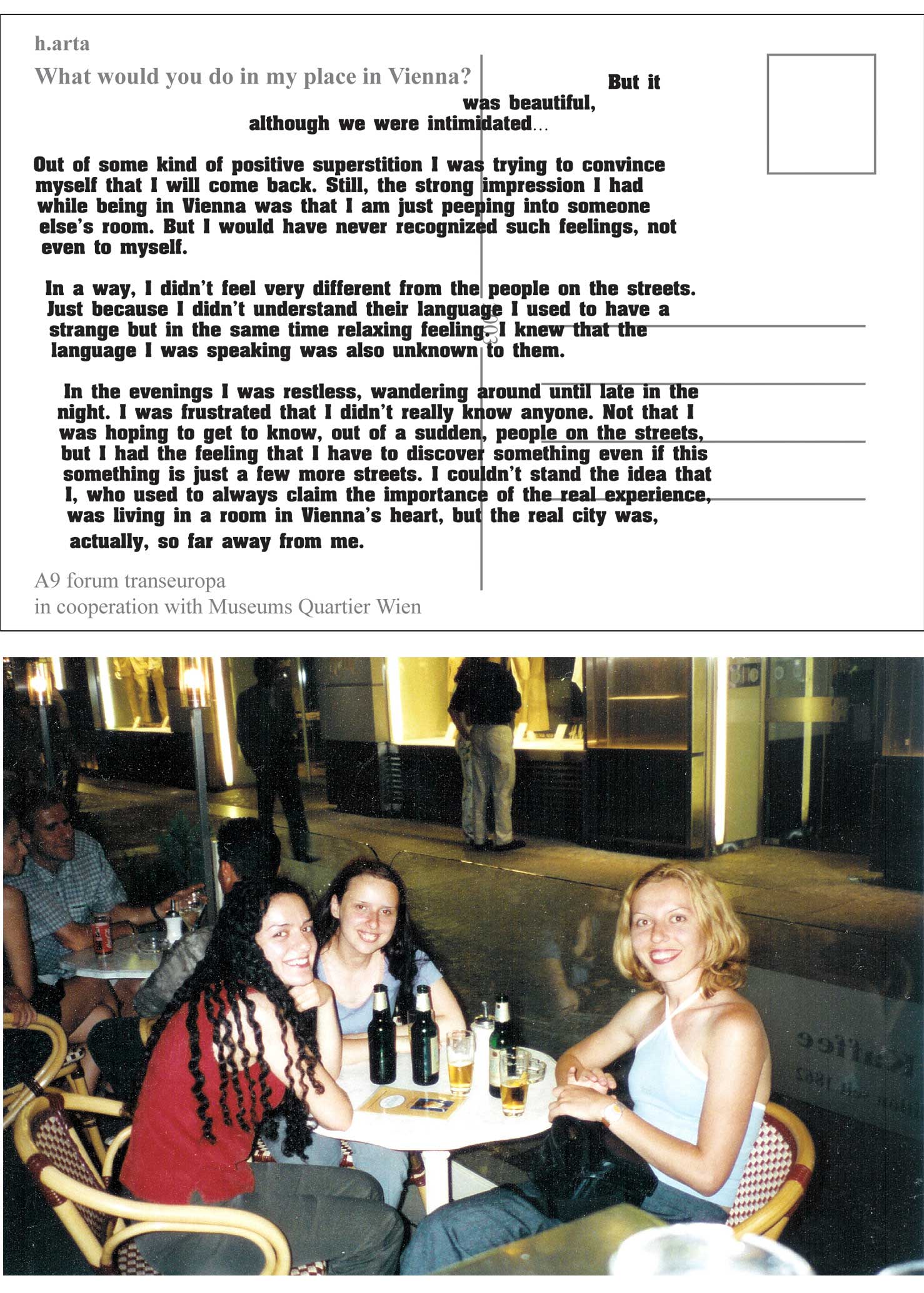 Anca Gyemant’s work I don’t know how to explain…consists in a video projection of a text explaining the dilemmas of objectively relating to Romania’s communist past where the leftist ideas were tragically misused during Ceausescu’s totalitarian regime. This rethinking of what communism really was has different nuances and implications according to where it is done, in Romania or abroad.
Condemning communism outside Romania can be misunderstood and taken as a condemnation of the leftist ideas in general, while declaring yourself as leftist in Romania can be misunderstood as an ignorance of what communism really was. Sliding around these different roles and the continuous need to explain is part of some kind of “eastern European artist” identity, label that is so necessary and in the same time so complicated to avoid. The flowing of the text in the video projection is from time to time interrupted by short sequences showing advertisements of the new EU member Romania, which are displayed on billboards in Vienna.

Rodica Tache’s work Magic is an ironical comment towards the mechanisms that made possible the transformation of the totalitarian Romania in the newly joined EU member. Most people from Romania experienced the changes in 1989 as an almost “magic” outcome, seeing this change as due more to the will of god than as a result of political interest. Now Romania is taking part to the present spectacle, showing the merging of one ideology into another.

The video Before and after is a recording of the festivities taking place in the Opera Square in Timisoara (the same place where the events in ’89 took place), festivities that marked the moment of Romania joining the EU. The mayor is also aware of the historical relevance of the place, constantly using the rhetoric of the Revolution in his discourse and stating that the dream for which people died in ’89 is now finally fulfilled by Romania joining EU. The recordings are taken from the confused standpoint of the regular citizen, without the glorifying views of television broadcastings and without the constructed greatness of a historical moment.